A selection of archival records: the property affairs of apple seller Allert Andriesz

2019 saw the end of the first phase of the project The Arts in Leiden 1475-1575. This means that all archival documents from the period 1475-1555 relating to the arts and crafts in Leiden, and in the care of Erfgoed Leiden en Omstreken, have been digitised and added to RKDexcerpts, including summaries in English (the domain name is Leidse Kunstambachten tot 1575). Right now we are working towards the next phase, which deals with the period 1556-1575. To give you a picture of the kind of documents found in the database mentioned, every three weeks the RKD is presenting an archival document for you to enjoy. The main character in the seventh episode is the apple seller Allert Andriesz.

We have all come across them: types that like to pick a fight. If you get into an argument with them you can be sure that the result will leave you with a nasty aftertaste, something all too familiar to a number of craftsmen in Leiden who fell out with Allert Andriesz. Although he is consistently described as 'apple seller' in sixteenth-century documents, he made his nest egg from property rather than fruit.

We first hear of Allert Andriesz on 13 April 1545, when he is embroiled in a dispute with his neighbour, the goldsmith Geryt Cornelisz. Without consulting the latter, Allert has removed a wall and anchors belonging to Geryt. In the Aldermen's Court, Geryt demands that to compensate him for the destruction of part of his property Allert pay him a sum determined by experts, or else two Flemish pounds 'on top of damages and interest'.

However, Allert has no intention of reimbursing his neighbour without a fight and he demands a written copy of the complaint that Geryt has filed with the Aldermen s Court. By 4 May Geryt has just about had enough of his neighbour's delaying tactics and he asks the aldermen to come to his house and assess the situation. That afternoon they conclude with their own eyes that Geryt's complaint is justified. But that is still not the end of the matter. Although the aldermen have been in person to take stock, Geryt has to lodge a new complaint. On 19 June Geryt demands that his wall anchors are put back in place because his house is in danger of collapse. 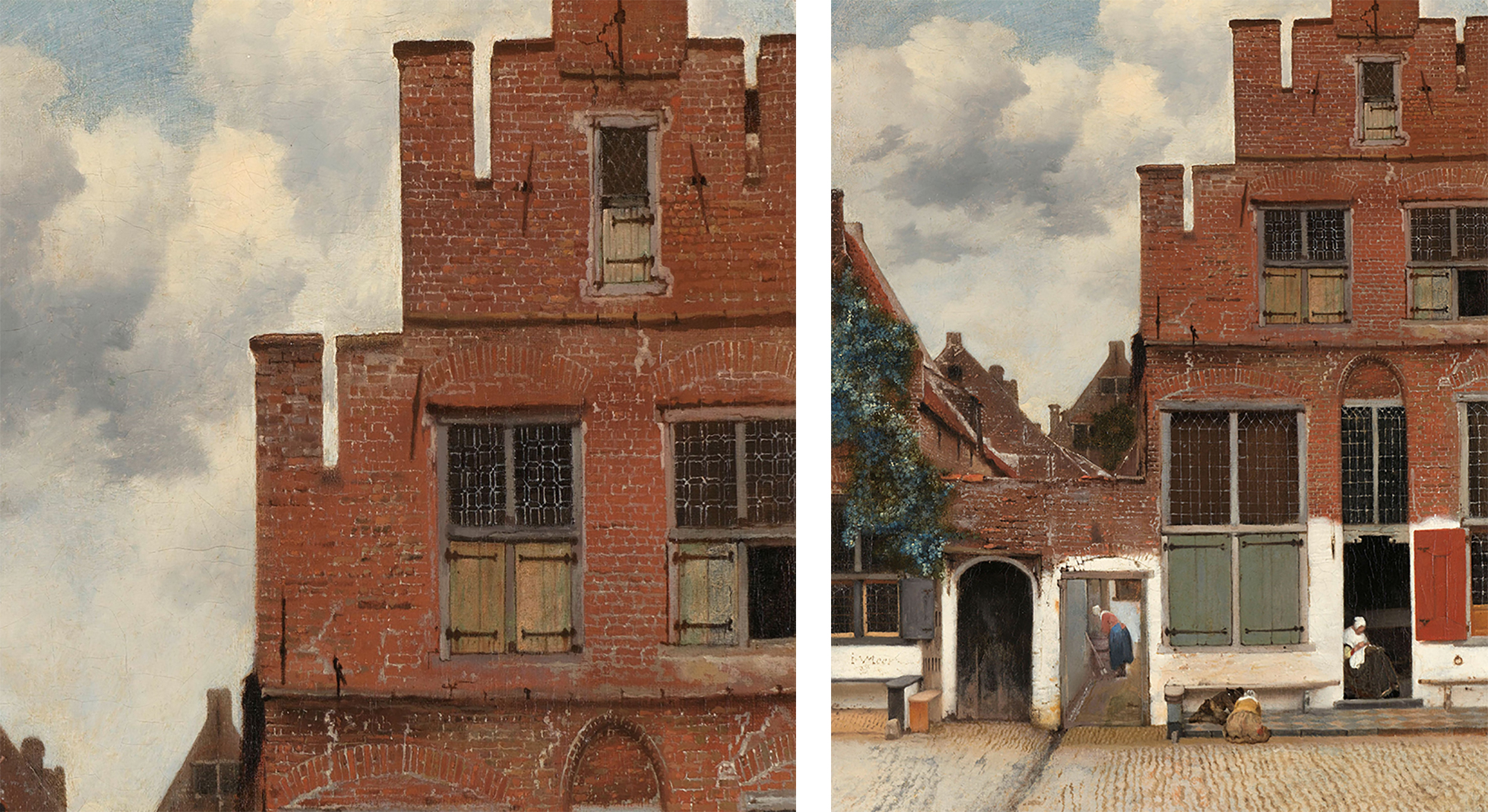 Several wall anchors can be seen in the façade of the house. A wall anchor was made of wrought iron and served to keep structural components such as walls and beams securely in place. Detail from: Johannes Vermeer, The Little Street, c. 1658, Rijksmuseum, Amsterdam.

Further rows in the Maarsmansteeg

The final outcome of the dispute is unknown, but three years later to the day, on 13 April 1548, another quarrel erupts between the neighbours in the Maarsmansteeg. This time Allert is pressing charges against Geryt because the level of the street has been raised. Consequently rainwater gathering in front of Allert's door '[is] deprived of its proper course'. Allert claims that this has caused him a great deal of damage and he demands that Geryt restores the street to its former level or else agrees to pay 100 Karolus guilders – or a different sum to be determined by the aldermen – to have the work done. Again, we do not know how the dispute was settled, but the very fact that such a trivial matter had to be resolved through the Aldermen's Court shows how sour the atmosphere had become.

Detail of the map by Joan Blaeu of 1649, with at the top in the centre, the Oude Rijn and to the right the Sint Pancraskerk or Hooglandse Kerk (no. 63). The Maarsmansteeg (no. 84) is sandwiched between the Visbrug (no. 62), the Vismarkt (no. 85) and the Breestraat (no. 83). On the Breestraat we can also identify the City Hall ('Raethuys', no. 88), where the aldermen held their court sessions.

The long drawn-out conflict in which Gysbrecht Cornelisz Campen found himself entangled is of a completely different order. On 21 November 1547, Gysbrecht accuses Allert Andriesz of an under the counter sale ('loese comanschip'), making over one half of the house and [the] yard' in the Maarsmansteeg to the woodturner Blaserus Allertsz. Gysbrecht swears before the Aldermen’s Court that he has evidence that the sale of the part of the house in which he and his wife are living is a deliberate attempt to rip him off ('the aforem[entioned] sale, which was effected with the aim of defrauding the plaintiff'). What was going on?

It looks as if the house in the Maarsmansteeg was jointly owned by Gysbrecht and Allert Andriesz and that the latter had somehow managed to trick the co-owner of his house into selling his share to Blaserus Allertsz. The vendor's surname – Allertsz[oon] meaning son of Allert – suggests that he was Allert's son. Did Allert devise a scheme which meant that Gysbrecht sold his half at a price far below its real value? Was Allert using his son to become sole owner of the house? Whatever the truth, Gysbrecht demands compensation or payment of 50 Flemish pounds plus damages.

The two adversaries eventually agreed on a settlement, for the following year we find Gysbrecht still living at the house in the Maarsmansteeg, although now as a tenant. Allert, however, was not at all happy with the settlement. Clearly it has been his goal all along to force Gysbrecht out of the house, as emerges from the fact that Gysbrecht renews his complaint against Allert on 4 June 1548, demanding that Allert follows the verdict previously reached by an arbitration committee consisting of four members. Apparently it was necessary to bring them in because Allert was so obstinate. This time Gysbrecht stipulates that if Allert does not abide by the agreement, he will withhold the rent, or else Allert must pay him a sum of 100 Karolus guilders plus expenses.

Squabbles over a house on the Oude Rijn

In May 1548 Allert is caught up again in a court case involving a house, on the banks of the Oude Rijn, which he jointly owns with the cabinetmaker Pouwels Willemsz. He is accused of playing a trick on his partner, this time because he has given Pouwels an ultimatum to decide if he wants to take sole use for five years of the property which they own together, demanding that Pouwels pay him an annual compensation of 16 Karolus guilders. However, according to the charge brought against Allert by Pauwels, Allert has failed to maintain the house, allowing it to fall into a such a deplorable state of disrepair that the demand seems utterly unreasonable. As before, we have no information about the outcome of this altercation, but it is crystal clear that relations between the two parties had broken down completely.

Bitten by a dog

Finally we come across Allert again in 1551, when his dog has attacked the writer Pieter Meesz. The wound in the victim's leg is so serious that it requires the services of a barber-surgeon. The case ends up in the Aldermen's Court because Allert needs to be reminded of his duty to pay the treatment costs plus compensation. The Leiden aldermen must have been shaking their heads at such insolence.