A selection of archival records: a red coral 'vyftich'

2019 saw the end of the first phase of the project The Arts in Leiden 1475-1575. This means that all archival documents from the period 1475-1555 relating to the arts and crafts in Leiden, and in the care of Erfgoed Leiden en Omstreken, have been digitised and added to RKDexcerpts, including summaries in English (the domain name is Leidse Kunstambachten tot 1575). Right now we are working towards completing the next phase, which deals with the period 1556-1575. To give you a picture of the kind of documents found in the database mentioned, the RKD is presenting regularly an archival document for you to enjoy. In episode 8 the theme is the rosary.

On 15 September 1553 Dirck Pietersz van Bancken starts a complaint in the Leiden Aldermen's Court. His wife has without his 'c[on]sent, will or knowledge' handed over precious jewels as collateral. To Anna, whose profession is that of second-hand dealer, 'a red coral vyftich with a silver pomander' and to Claesgen Lambrechtsdr 'a gold girdle and a ditto ring'. Dirck demands that the valuables be returned to him immediately. The Aldermen's Court grants Dirck's claim on provision that he pay his outstanding debts, respectively 8 Karolus guilders and 4 stivers to Anna, and 20 Karolus guilders and 9 stivers to Claesgen. Jewellery such as a 'coralen vyftich' ('coral fifty'), a rosary made from red or 'blood' coral, was certainly not in the first place made to be used as collateral. What was the function of a 'vyftich'?

A 'vyftich' consist of fifty small, and five large beads. The small beads help remember the number of Hail Marys to be recited, the large ones the number of Pater Nosters. Prayer beads were made to suit diverse 'tastes'. Someone with less means would pray using beads made of wood or bone. Someone with more to spend might choose beads made of a precious material such as silver, mother of pearl, crystal or red coral. From earliest times, red coral had been associated with blood and love, and was regarded as a highly appropriate material for a rosary. Paintings commonly show the image of Mary with the Christ Child on her lap, playing with a 'blood' coral rosary, or wearing one around his neck. 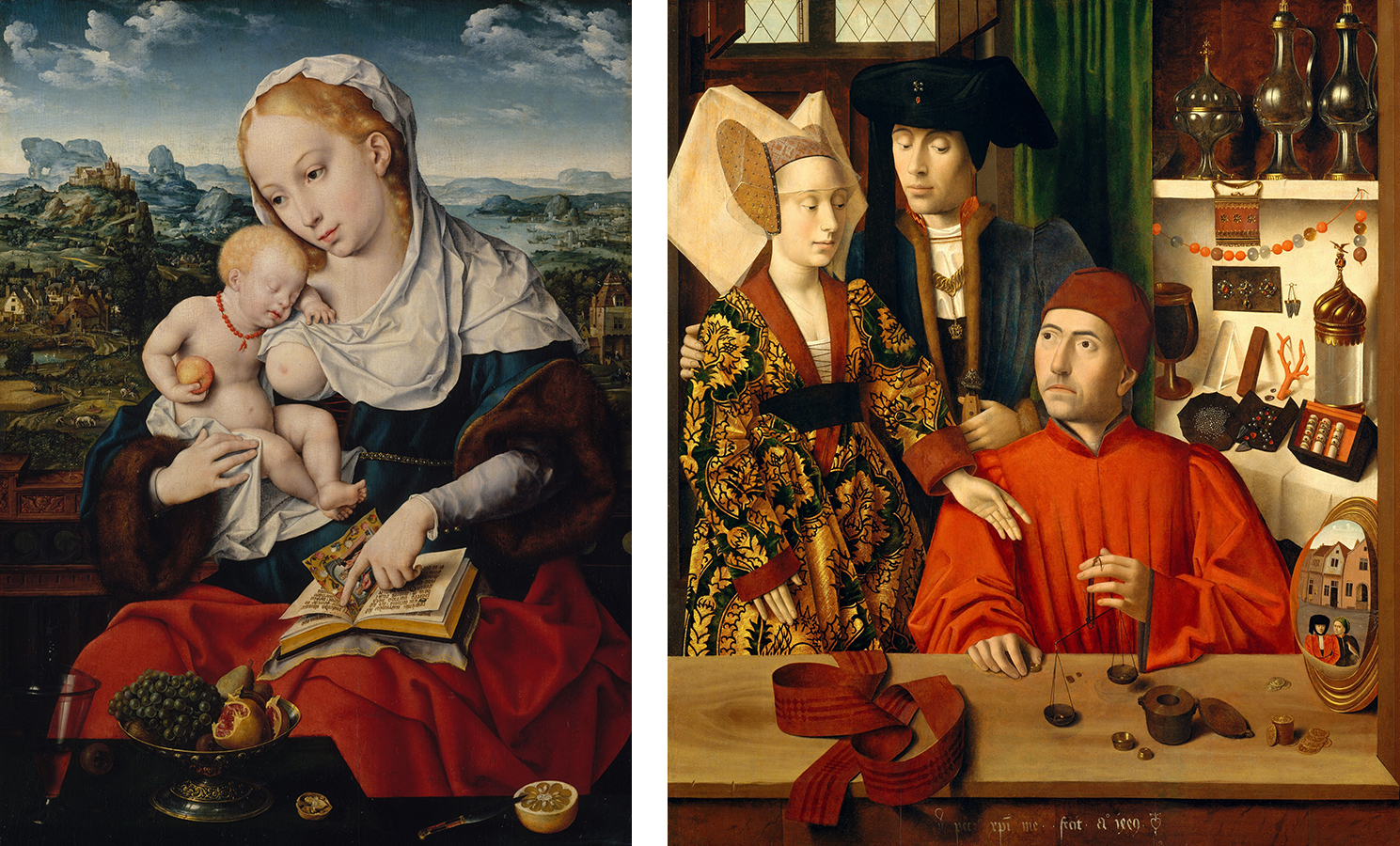 1. Joos van Cleve and studio, Virgin and Child, c. 1525, The Metropolitan Museum of Art, New York. The Christ Child wears a necklace of red coral beads around his neck.
2. Petrus Christus (attributed to), A goldsmith in his workshop, 1449, The Metropolitan Museum of Art, New York. The painting provides a picture of the variety of materials with which goldsmiths worked and the objects they made. They include, suspended from two nails, (prayer) beads of red coral, crystal and amber. Underneath, displayed against the back wall, we can see the same materials in unworked form.

Wealthy citizens were keen to have their portraits painted showing their rosary. These include Heylken Pietersdr van Haeswinckel and her husband Dirck van Brouchoven, who had themselves immortalised on panels painted by an anonymous artist, possibly around 1535. The couple did not originally come from Leiden but had close ties with the city. Their son Jan became a citizen of Leiden in 1542 and Dirck was buried in the crossing of Saint Pancras's Church.

Dirck had several lucrative jobs in Holland. He was a clerk, a bailiff, a magistrate and a steward in various towns. These functions defined his status and this is also how he chose to be represented in his portrait: dressed in a fur-trimmed gown, while he leafs through what looks like an account book, with coins on the table in front. Heylken is dressed in black velvet and is wearing a gold girdle around her waist, to which a rosary is attached, with coral beads alternating with gold paternosters. 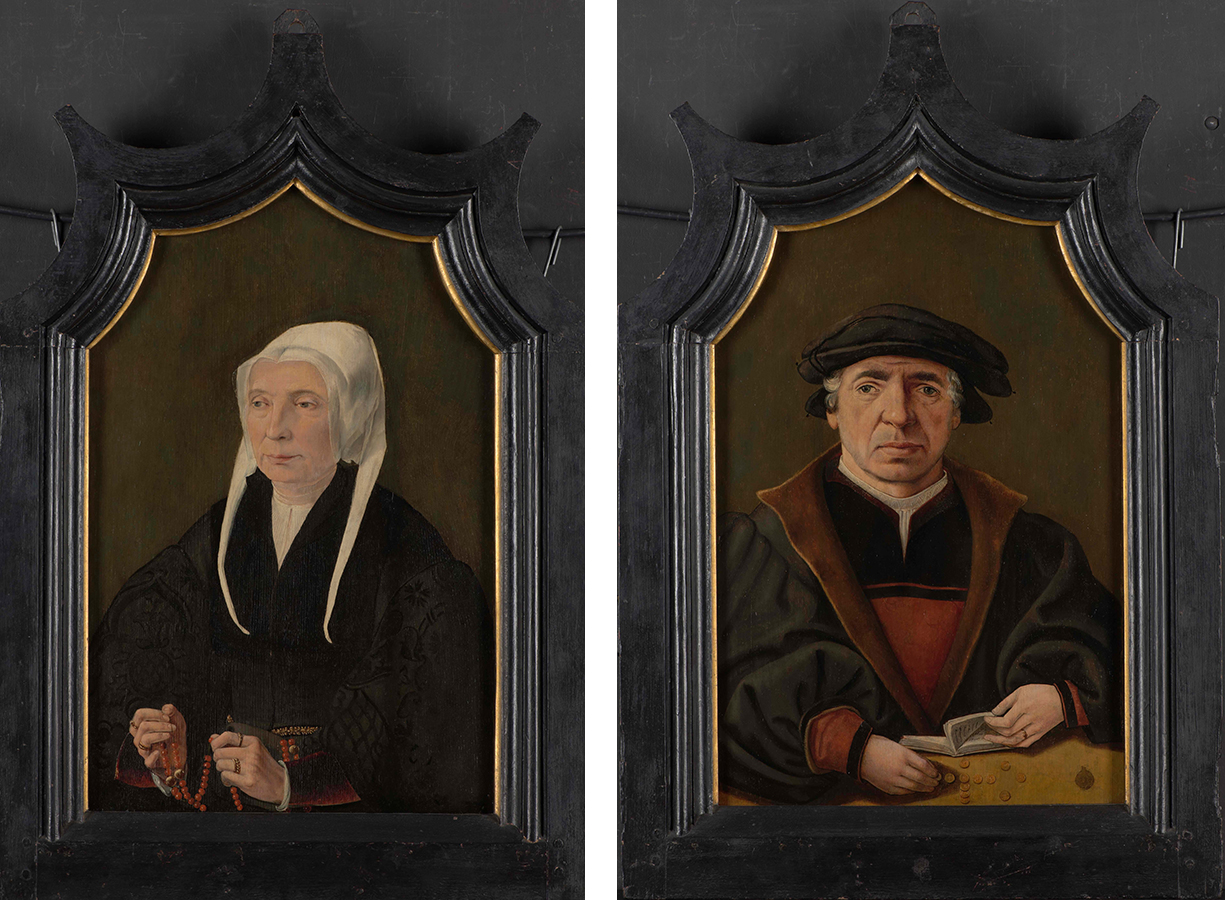 The rosary prayer became more and more prevalent in the Netherlands in the second half of the fifteenth century. It seems also that the arrival of book printing stimulated the use of the rosary. In about 1500 Hugo Jansz van Woerdenput brought several printed prayer books onto the market in Leiden which were a tool to help say the rosary. One example of these is the Onser liever vrouwen croon (Our Holy Lady's Crown). It is a simple arrangement of a series of thirty Hail Marys, for the contemplation of all of Mary's limbs, or as the printer's introduction suggests: 'a greeting to all the blessed limbs of the glorious Queen of Heaven, the pure virgin Mary, and it is called Our Blessed Lady's Crown.' Whether Heylken knew of the little books published by Hugo Jansz van Woerden can no longer be established, but she will undoubtedly have had such a pocket prayer book in her possession.