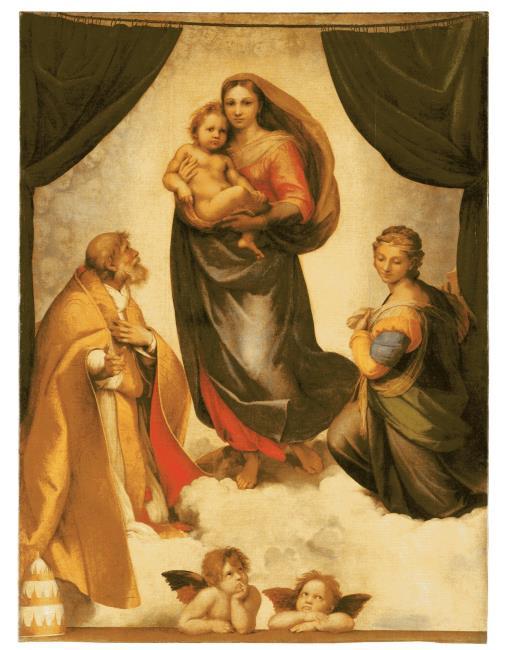 'Despite the lack of documentation, the Sistine Madonna is among the most easily datable altarpieces: In 1511, the new church of San Sisto was almost finished; on 24 June 1512, Piacenza joined the Papal States; and Julius II died not long after, on 21 February 1513. It seems very likely that the commission was related to Piacenza's joining and that the painting was completed not long after Julius' death.' Capellen p. 108
Created in
Italy

Title
Title of the art-work in Dutch
De sixtijnse Madonna
Other (former) title
Other title(s) or name(s) which the work of art has had, or by which it is also known. This sometimes involves rejected identifications of the subject or sitter.
Madonna de Dresden
English title
Sistine Madonna
Keywords
Christian religious scene, Virgin and Child, pope, saint, curtain, angel
Iconclass code
Iconclass codes and text contain specific scenes and names. An Iconclass code or notation is a code from the multi-lingual Iconclass system for subject retrieval. For more information about this system, see www.iconclass.nl.
11F41(+5)
Madonna: Mary standing (or half-length), Christ-child close to her bosom (+ donor(s), supplicant(s), whether or not with patron saint(s))

Collection(s)
Staatliche Kunstsammlungen Dresden - Gemäldegalerie Alte Meister, Dresden
1754 - untill 1754 San Sisto, Piacenza, Italy; in 1759 During the Seven year war the painting was in Konigstein; in 1763 it returned to the Dresden gallery; in 1855 is moved to a new gallery; 1945 during the Second World War it was hidden in the Sovjet Union and returned to Dresden in 1955.