The correspondence between Theo van Doesburg and Antony Kok

Edited and with an introduction by Alied Ottevanger

'De Stijl must lead the way everywhere’ was the war-cry sent by the leader of the De Stijl movement, Theo van Doesburg (1883-1931), to his friend Antony Kok (1882-1969), a railway clerk with a passion for poetry and philosophy. The postcard in which Van Doesburg lets out this cry is part of the correspondence between the two men, a large part of which survives (240 items) and is published in this fully comprehensive volume. Van Doesburg and Kok met when they were both mobilised in 1914 in Tilburg, and they remained lifelong friends. They were bound by a shared desire for a new kind of human society. The role of art was pivotal and showed the way forward. From the very beginning the two friends also exchanged ideas in their letters.

In 1917, together with Mondrian, Van der Leck, Huszár and Oud, the two men founded the periodical De Stijl. This publication provided a platform for the art and aims of those who were experimenting with radically new forms. When Van Doesburg travelled abroad in 1919 to establish new contacts in Germany, France, Italy and elsewhere in Europe, De Stijl became the vehicle of the international avant-garde. Throughout his foreign missions, Van Doesburg kept up his correspondence with Kok. The letters follow the development of the two men and the artists associated with De Stijl and we see how they and the group made the most important Dutch contribution to modern art. 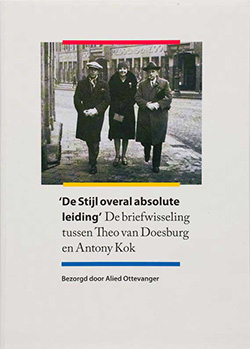