Photographer of a vanished city

Since it was revealed in 1962 that George Hendrik Breitner (1857-1923) was a successful photographer as well as a gifted painter, his photographs have received a great deal of attention in publications and exhibitions. They are generally regarded as the most interesting examples in the Netherlands around 1900. Breitner succeeded better than any other photographer in capturing the hustle and bustle of the city: urban renewal (demolition as well as construction), street life, people going about their business. His snapshots of Amsterdam have always attracted most attention, not only because he made so many, but because this group were discussed early on, and they became familiar to the public. For well over 40 years the RKD has been looking after some 2000 negatives, including nearly a hundred almost certainly made in Rotterdam.

Unique series of photographs of Rotterdam

This volume of the RKD Sources Series brings together for the first time a unique group of Rotterdam photographs. The book consists of a plate section, featuring 35 full-page photographs, a complete catalogue compiled by Aad Gordijn, describing and reproducing all of the photographs, as well as two essays. The first of these, by Hans Rooseboom (Rijksmuseum, Amsterdam), is titled 'Breitner in Rotterdam. Een vuile stad met een heele boel sleeperswagens' (Breitner in Rotterdam: a filthy city with a great many horse-drawn carts); in the second essay, titled 'Licht en donker in Rotterdam. George Hendrik Breitner en de werkstad begin twintigste eeuw' (Light and dark in Rotterdam: George Hendrik Breitner and the industrial city in the early twentieth century), Paul van de Laar takes a look at Rotterdam at the time of Breitner’s photographic explorations. 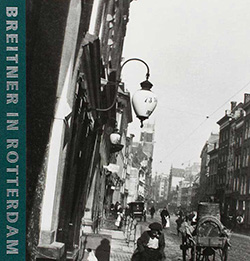