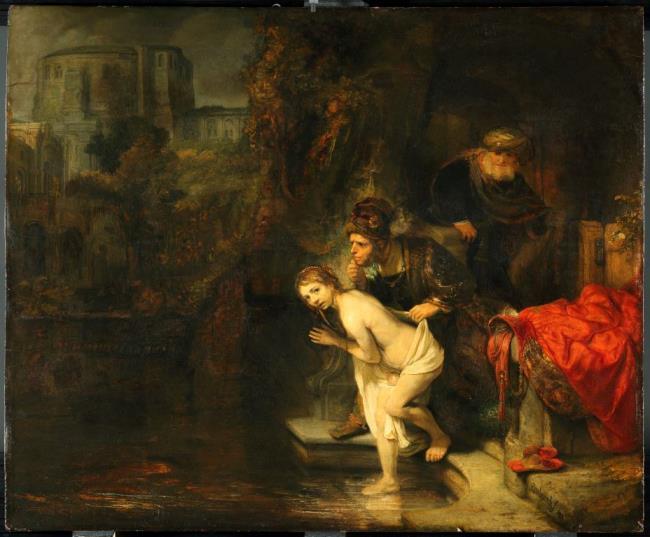 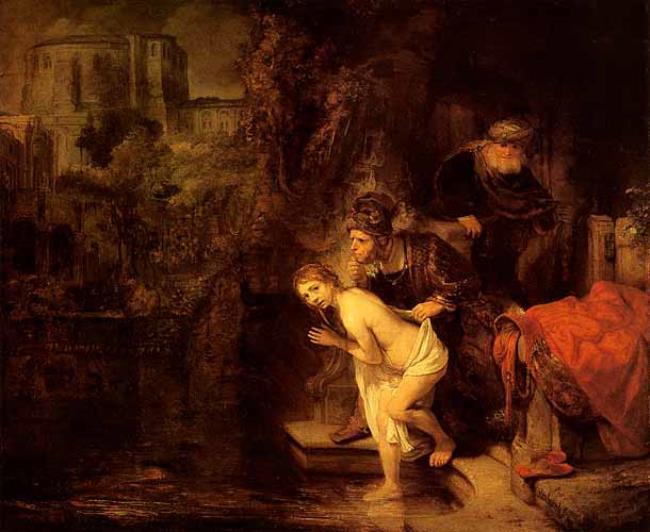 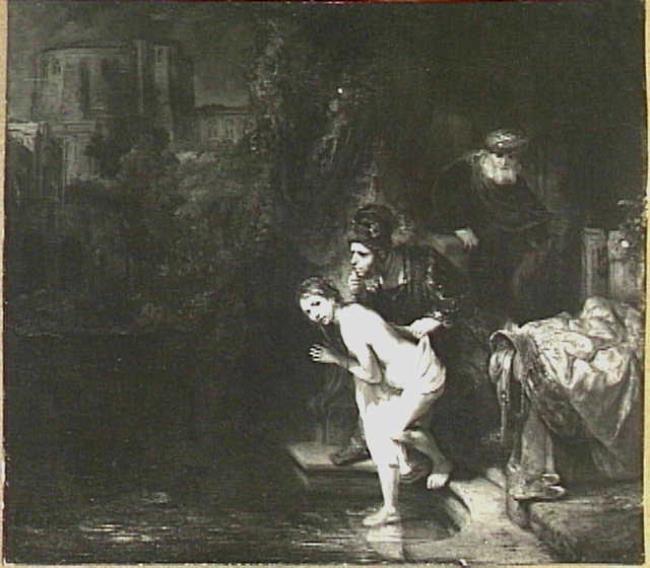 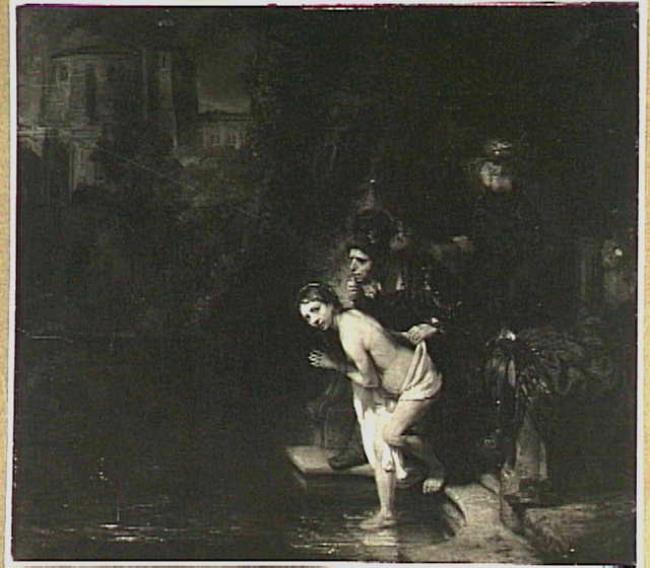 Objectcategorie
schilderij
Drager/materiaal
paneel
The type of wood is identified as "peltogyne venosa" or purpleheart (see The Rembrandt Database: http://www.rembrandtdatabase.org/Rembrandt/painting/49190/susanna-harassed-by-the-elders/document/17977). In the mid-17th century, various types of South American wood were commonly used to make packing cases for sugar cones. The panel of "Susanna and the elders" was most probably part of such a crate (Klein 1988, p. 40-41). This would identify the holes along the top and bottom edges of the panel as peg holes, necessary for the crates's construction (Corpus of Rembrandt paintings 1982-, vol. 5 (2011), no. V I, p. 325).
Vorm/maten
liggende rechthoek 76.6 x 92.8 cm

This painting has a complex genesis with radical changes in the composition. In themselves, radical changes do not necessarily indicate a long working process. However, there is an archival document , which implies that the painting was considered to be completed in or by 1642. In 1659 Adriaen Banck declared he bought a painting depicting the story of Susanna from Rembrandt in 1647. This statement was part of eleven other depositions, drawn up by the guardian of Titus van Rijn, Louis Crayers, to determine the size of the inheritance from Titus' mother Saskia van Uylenburgh who died in 1642 (Strauss/Van der Meulen, 1979, no. 1659/17). Because the other depositions concern paintings which were already finished in 1642, the present painting must have been completed in some way in that year. In the Corpus of Rembrandt Paintings is substantiated that Rembrandt started the painting c. 1638 (Corpus of Rembrandt Paintings, vol. 5 (2011). This date is based on a preliminary sketch, made by Rembrandt c. 1638, for the elder behind Susanna depicted in the first version of the painting. In this drawing, which is now in Melbourne, the elder wears a larger hat and his hand is placed before his nose. Traces of the first version of the elder are visible in the X-ray, as well as a blue sky and a large tree instead of the tower. Sluijter and more recently Katja Kleinert and Claudia Laurenze-Landsberg date the first stage of the painting somewhat earlier, around 1635; before Rembrandt’s painting of Susanna, which is now in The Hague (Sluijter 2006, p. 131-139; Bevers/Kleinert/Laurenze-Landsberg 2015, p. 13-35). In 1635/1636 the story of Susanna was a subject in Rembrandt's workshop, as seen in numerous depictions of her in drawings by his pupils. According to Kleinert and Laurenze-Landsberg it can be concluded that the first stage of the painting served as a example for the drawings of the pupils. After this first stage Rembrandt must have reworked the painting twice. A drawing attributed to Barent Fabritius after the Berlin painting represent the second stage of the painting, which shows , in comparison with the present painting, a slightly different composition and elements which Rembrandt eliminated before the final version (for example a swan in the pool). The reliability of this copy is confirmed by the X-ray of the painting (Corpus of Rembrandt Paintings 1982, vol. 5 (2011), no V I, fig. 2).This second stage is probably c. 1643. Probably Rembrandt made the final changes just before or in 1647, making use of a study of a seated female nude which is now in Berlin. Recently Kleinert and Laurenze-Landsberg discovered that Sir Joshua Reynolds, who owned the painting between 1769-1792, made significant changes to the painting (Bevers/Kleinert/Laurenze-Landsberg 2015, p, 63, fig. 6).